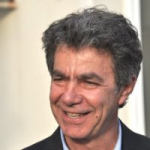 Well-known European rural sociologist, Professor Charalambos Kasimis, has been appointed Secretary General of Agricultural Policy & Management of European Funds in the Greek government. He is the third in line in the hierarchy of the Ministry of Rural Development and Food, after the Minister and the Deputy Minister. He will play an important role in shaping agricultural and rural policy at a critical time for the Greek economy. Professor Kasimis’ brief biography is provided, below.

Charalambos Kasimis is Professor of Rural Sociology at the Department of Agricultural Economics and Rural Development of the Agricultural University of Athens and Director of the Postgraduate Studies MSc. Programme “Integrated Rural Development and Management of Rural Space” (2010-2014). He has served as a member of staff at the Department of Economics of the University of Patras (1986-2003) and as the Director of the Institute of Urban and Rural Sociology at the National Centre for Social Research of Greece (1995-2000). His research interests focus upon issues of rural transformation and development in Greece, the Balkans and the Mediterranean region – especially in regard to family farming, employment and rural change. In past  years, the implications of international immigration on rural regions have become one of his main research foci. More recently, he has turned his attention to the study of the implications of the economic crisis upon the rural regions of Greece.